DFS’ latest fleet re-branding campaign illustrates the versatility of the Traxx system, providing an opportunity to completely refresh the appearance of a commercial vehicle fleet quickly, simply and extremely cost-effectively, particularly when compared to traditional vinyl techniques. Unlike the previous campaign, which was promoted across numerous marketing channels, the new creatives have been developed purely as moving billboards, each celebrating the furniture retailer’s staff, customers and products.

As the Traxx frames had already been installed, the first set of printed banners were simply removed and later recycled. The new creatives were slotted into place by RGVA’s skilled application team in as little as 15 minutes per banner.

Kimberley Knowles, Production Manager at DFS, says: “This is the first time we’ve really embraced the quick-change nature of the Traxx system. It’s been an exciting process and we’re delighted with the results. RGVA showed us last year just how rapidly the system can transform the fleet, and we’re confident their ultra-efficient approach will once again make the installation process go like clockwork.”

Furniture retailer DFS operates a commercial vehicle fleet comprised of more than 400 demount truck bodies and 89 tri-axle trailers. Until 2016, all assets had displayed a corporate livery, but the company was keen to unleash the huge marketing potential of its fleet by rebranding its trucks and trailers with a series of seasonal campaigns.

DFS turned to RGVA to install the quick-change frame and banner system, Traxx, to revitalise its entire fleet, using it for the first time over the summer of 2016 for its award-winning ‘Sporting Ambassadors’ campaign, which featured athletes Laura Trott, Max Whitlock and Adam Peaty. The application of the three new livery designs was the largest roll-out of the Traxx system in a single project in Europe. The following summer, RGVA quickly and cost-effectively installed four new designs on the DFS fleet, celebrating the UK’s love of the sofa.

CREATIVE FREEDOM – ON A GRAND SCALE

RGVA is one of only two official distributors of Traxx in the UK, and the only business to have worked with the system since its creation more than a decade ago. Traxx incorporates a patented high-tension aluminium frame which is used to apply ripple free, high-definition printed banners onto the side of commercial vehicles. The banners quickly and simply slide into position, and can be removed in a fraction of the time and cost of traditional techniques.

DFS’ original Sporting Ambassadors installation was completed within just seven weeks – an extremely rapid turnaround that was required to ensure the campaign launched on time. The roll-out saw teams of graphic technicians from RGVA install frames and banners across 60 DFS sites nationwide. RGVA also installed new 3M vinyl graphics on the rear shutters of each asset. 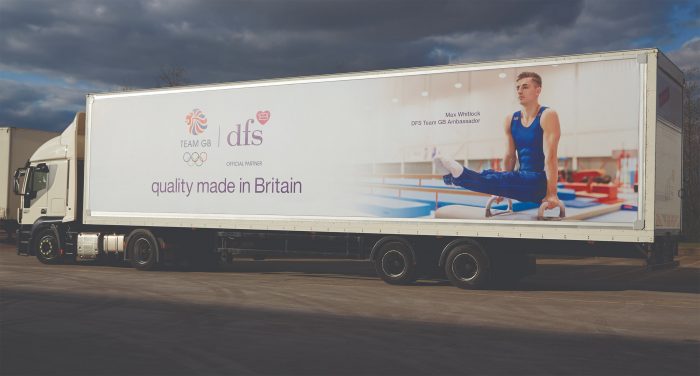