Lincolnshire-based haulier Freshlinc, called on RGVA to turn 10 of its trailers into moving works of art as part of an innovative campaign designed to celebrate some of Boston and South Holland’s most famous residents. The 10 bespoke designs were created by local design agency Electric Egg, before the team at RGVA printed them on self adhesive vinyl (SAV) and applied them to the 13-metre Schmitz Cargobull trailers. The entire installation process was completed in three weeks at Freshlinc’s Spalding base.

Transported – the community arts project that commissioned the project – placed a great deal of trust in RGVA to ensure the printing process, application, and quality of materials matched their careful brief.

A GALLERY ON WHEELS

The concept of Transported’s campaign was to encourage people to engage in the arts using Freshlinc’s trailers to reach an audience of thousands, with each travelling around 2,500 miles a week across the UK and Europe. The subject of each design was chosen by a Freshlinc employee, who also featured in print on the rear door graphics alongside an explanation of their choice. The famous residents were chosen for the significant impact they have made on the world, and include Dame Sarah Swift, the founder of the Royal College of Nursing, and Matthew Flinders, the first man to chart the coast of Australia.

Freshlinc’s Commercial Director, Ashley Holland, says: “Transported aims to bring art into the community, so the
collaboration with Freshlinc was perfect, with thousands of people seeing our trailers every single day. It’s creative campaigns like this that underline just how powerful truck-side promotions can be in reaching vast audiences.”

Latex printed on 3M IJ40 laminated vinyl, the designs were some of the most detailed the team at RGVA has fitted to trailers of this size. The pin-sharp reproductions perfectly illustrate the power of RGVA’s HP Latex printers and the quality of the 3M materials.

Holland adds: “These trailers are literally works of art, so we needed to be confident that they’ll look their best for their entire working life. RGVA has a proven track record in the industry, and their involvement will ensure these spectacular liveries will be seen far and wide for years to come.”

Expected to be on the road for between three and six years, the 10 Freshlinc trailers are a showcase for how SAV graphics can be used as a powerful creative tool. 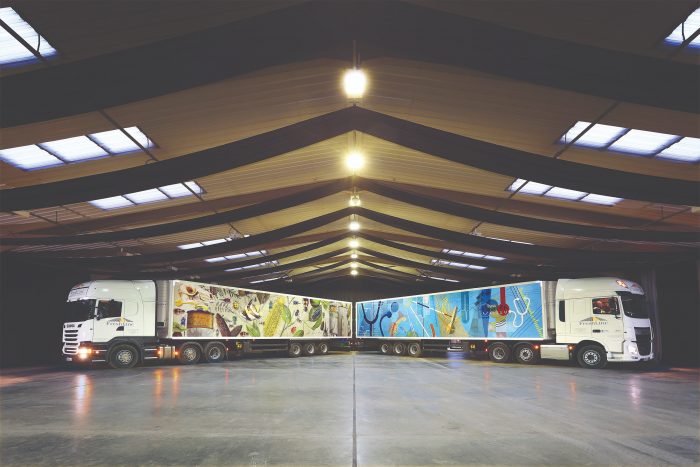