With close to 20 years’ experience in the industry, RGVA is accustomed to fitting graphics on this scale, scheduling the work to minimise any interruption to the fleet’s day-to-day operation. As a Gold-tier 3M™ Select Graphic Specialist, RGVA opted for 3M’s versatile latex printed IJ180 and IJ140 vinyl for the job, materials that are both perfectly suited to the variety of application processes involved. With each RGVA technician being 3M AVW (Approved Vehicle Wrapper) qualified, the company is able to offer a three-year, 3M Matched Component System warranty for the work, guaranteeing the quality of the materials and their application.

“When it came to fitting the graphics, RGVA was the obvious choice. We’ve worked with them in the past, so we knew we could rely on their team to complete the work quickly and to the highest standard. They had to go above and beyond to deliver within the timescales we specified, but their flexibility and commitment made it happen and everyone at Howard Tenens and Toolstation is delighted with the results,” added O’Neill.

When tools and equipment supplier, Toolstation, wanted to enhance its brand presence on the road, the team turned to RGVA to fit a striking new livery to 34 trucks and trailers in its commercial vehicle fleet. In a joint project with Howard Tenens – the third-party logistics provider that owns and operates Toolstation’s vehicles – RGVA was given six weeks to replace the existing Howard Tenens livery with new Self Adhesive Vinyl (SAV) graphics in the Toolstation colours.

As Toolstation’s trucks and trailers originally featured the Howard Tenens livery, the on-road brand message for the tool and equipment supplier was confusing. Howard Tenens agreed that Toolstation should re-brand the vehicles used as part of the company’s logistics contract in order to create a more consolidated, powerful presence on the UK’s roads. Beth O’Neill, Group Commercial Manager for Howard Tenens, says: “The team at Toolstation truly understand the vital role that vehicles play in building brand awareness. As they are such an important customer for Howard Tenens, we worked together to consolidate their corporate identity across the fleet, applying the company’s livery to each of the vehicles we use as part of their operation.” 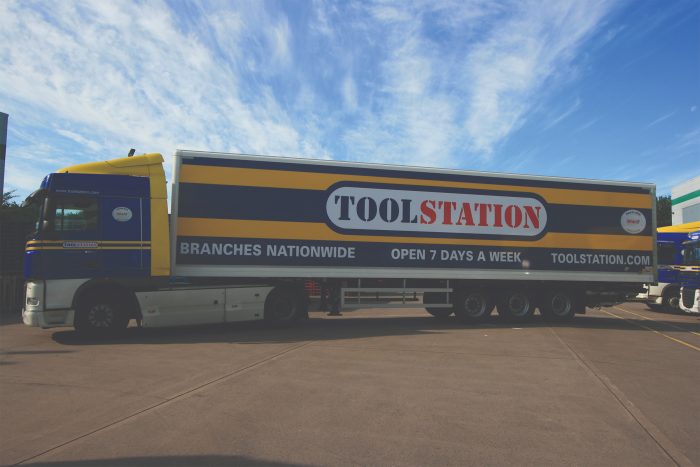